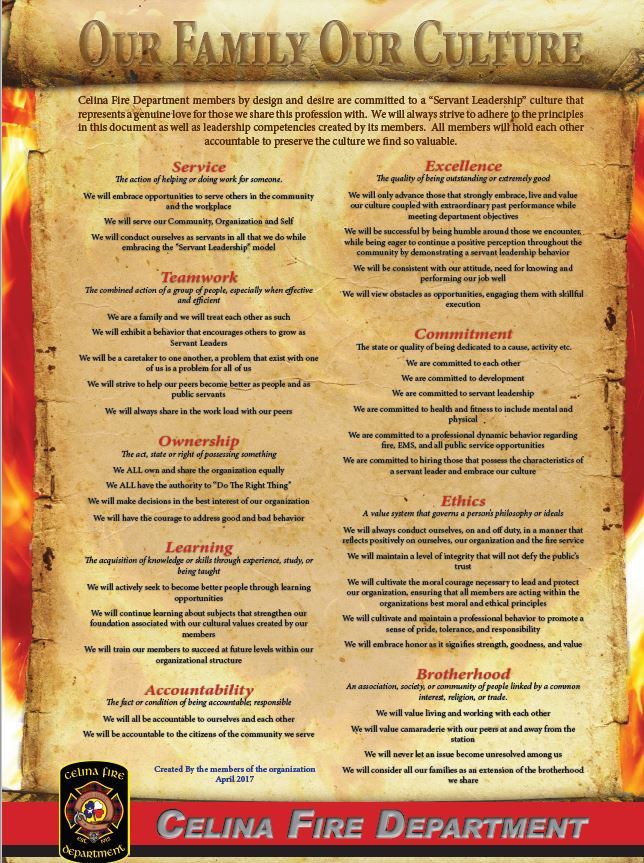 TO OUR COMMUNITY
• The lives of our members and customers are our highest priority.
• We strive to be fiscally responsible in all we do.
• We will strive to earn the respect of our community by providing the best possible service based upon concern, compassion and professionalism in all endeavors.

TO OUR ORGANIZATION
• We work as a team to accomplish the Department and City’s mission and goals through open communication, cooperation and recognition of shared successes.
• We encourage and promote pride, loyalty and a sense of ownership in our department and our community.

TO EACH OTHER
• We are committed to openness and honesty in all situations.
• We value each member of the department and treat their diverse contributions with dignity, fairness and respect.
• We are accountable to those we serve and each other.

The Celina Fire Department was established in 1912 consisting of residents of the City of Celina and the surrounding area. Originally, the fire station was located behind what is now the Main Street Office at 302 W. Walnut Street. The department purchased its first new fire engine in 1939, which it still owns. At present, the department has three Pierce engines, a Pierce quint, two brush trucks, four ambulances and several staff vehicles.

In December of 2001, the first full time fire fighter was hired by the City in the capacity of Fire Chief, and in December of 2004, a second firefighter was employed. At present, the Department has a full time Fire Chief/Fire Marshal, an Operations Chief, An EMS/Emergency Management Chief, two Fire Inspectors, three Battalion Chiefs, three Captains, six Driver Operators and 26 firefighter/paramedics.

On December 1, 2007, the Department initiated its own EMS service. Five firefighter/medics were hired to provide a paramedic and EMT on shift 24/7. Additionally, the fire department was and still is responsible for emergency management for the entire city. The fire district for the Celina Fire Department consists of approximately 100 square miles. These boundaries cover parts of Collin and Denton counties. The Celina Fire Department has mutual aid agreements in place with all of its surrounding cities.

In August 2015, the City of Celina Fire Department opened Fire Station 1 at 1413 S. Preston Rd. in Celina. This building gives emergency responders excellent access to Preston Road and reduces the response times to many parts of the City. Station 2, opening in January 2020, is located at 1805 Light Farms Way, and will also reduce response times.

Celina is on the verge of becoming one of the larger cities in the D/FW Metroplex, and will eventually be home to many fire stations.