Celina’s ultimate growth boundary is nearly 80 square miles in area, which is larger than both Frisco and Plano, and Celina’s ultimate build-out population is estimated to be approximately 378,000 in number.  However, just less than half that area is currently within city limits.

Unregulated development in the ETJ can damage property values and cost City taxpayers.   The State of Texas limits what a County can require of new development, so meaningful development outside the city limits does not follow the City’s safety standards nor many of its other design standards.  In order to ensure orderly and well-managed growth, the project needs to be in city limits, or be under an agreement with the City to abide by modern standards.   Otherwise, city taxpayers subsidize new growth outside city limits, and many projects allowed outside of zoning restrictions can negatively damage property values for an entire area.  The City’s long-range tax base and tax rate are both impacted by the City’s growth plan and regulatory framework.  City taxpayers subsidize fire and police to properties in the ETJ, absent annexation or other agreements.

Celina has initiated conversations with all property owners in its ETJ to discuss various options to defer annexation.  The benefit to the property owner, under the deferral option, is that annexation is delayed.  The benefit to the City is that the agreement also includes a clause that any meaningful development, prior to the natural termination of the agreement over a prescribed amount of time, requires the project to follow safety and design standards, in addition to being annexed.

Property owners who do not wish to be annexed have the option to sign a deferral agreement, which ensures that one’s rural lifestyle is not interrupted, as private agriculture and residential land uses may continue without interference.   However, any meaningful development would trigger annexation and follow city codes. Thus, property rights are protected, yet future development rights are negotiated with the City.

For properties that end up being annexed (all of which have received, yet chosen not to enter into an agreement with the City), the prioritization methodology is transparent.   Properties that are empty, larger, or considered in close proximity to the development pathway are prioritized.   Thus, properties along major growth corridors, adjacent to or in close proximity to existing city limits, or have other factors which increase the tract’s potential for development in the near term rank higher in terms of priority.

The City of Celina derives its authority to annex property into the city limits from Chapter 43 of the Texas Local Government Code (TLGC) as prescribed in Section 1.03 of the City’s Home Rule Charter.  Certain types of annexation procedures are required to be included in a formal municipal annexation plan; however, inclusion in an annexation plan is not applicable in several instances, including when the area will be annexed by petition of more than 50% of the real property owners in the area proposed for annexation or by vote or petition of the qualified voters or real property owners as provided by Subchapter B (Chapter 43, TLGC).  In 2018, the City Council adopted a Resolution that outlined its approach to annexation following recent changes in State law.

In 1858, the first statutes passed that allowed for general law incorporation of a city, in addition to certain annexation powers.   In 1912, Texas voters approved a Constitutional amendment that granted cities over 5,000 population that adopt a home rule charter by election the full power of local self-government, including the ability to unilaterally annex property.  One primary purpose of annexation was so that a group of people could help share costs associated with modern living (police, streets, water, sewer, fire, EMS, etc.).  Residents outside city limits still enjoy and use city services (parks, libraries, streets, youth recreation), yet do not participate in sharing the costs of those services.

In 1963, the Municipal Annexation Act outlined procedures for annexation and created the concept of extraterritorial jurisdiction (ETJ).  In the late 1990s and early 21st Century, the policy challenge of balancing the interests of property owners and cities’ desire to better manage growth led to multiple adjustments to annexation law.  In 2017 and 2019, additional modifications were made to annexation law in Texas.

A common misconception is that a property is either “in the city” or “in the county”.  Although this is a simple approach to help conceptualize jurisdictions, it fails to consider the extraterritorial jurisdiction, which functions as a “halo” for cities where certain city regulations apply, even if outside city limits.  For example, the Subdivision Ordinance applies to the ETJ, so any subdivision of land in the ETJ is already regulated today.  However, the Zoning Ordinance does not apply to the ETJ, which is why land use restrictions do not apply to the ETJ and how sometimes unfavorable land uses spring up, even if contrary to the long-range plans of the community.  There is no authority for a city to preclude a land use that is damaging to property values from locating in the ETJ.

If one reads the Comprehensive Plan or the Parks Master Plan, the reader will notice that the entire ultimate growth boundary is included in the City’s long range plans.  Thus, Celina is preparing and planning for all of its future 378,000 estimated residents and not just the approximately 25,000 residents that call it home today. The community has provided ample input regarding preferences on aesthetics, such as landscaping and building materials, and the location of various land uses.  Unfortunately, when some land uses construct in the ETJ in an unregulated manner, these integrity of the long-range plans are undermined, and neighboring property values can be damaged.

When property develops outside of city limits, the City’s safety and nuisance regulations, such as noise and lighting, do not apply.  One primary purpose of zoning is to protect the long-range tax base so that low-value development does not detrimentally impact property values and the enjoyment of one’s property.  State law does not allow counties the power to zone property, so the County is limited in its ability to meaningfully regulate new development.  Towing yards, manufactured home parks, batch plants, and other develops can damage the property values of neighboring properties.   Without city involvement, property is not protected from such outcomes.

When the city limits map is studied, there are numerous enclaves, or “donut holes” where a property has not been annexed yet, despite being generally surrounded by city limits.  This creates difficulties for first responders, as it may be unclear which properties are in city limits and which properties are not, without first having to study a map.  Having clean borders that are logical helps police better enforce traffic safety rules and in response times during emergency.

Fire, EMS, and Police respond to service calls outside city limits.  The County does not have a fire department with first responders.   So how does this get paid for? City taxpayers subsidize these services to certain properties in the ETJ and elsewhere.  The County pays the City a small amount for Fire & EMS service, but the true costs to city taxpayers are far more than what the County pays in return.  Police services are not compensated at all by the County.  Thus, city taxpayers cover the costs for properties in the County. 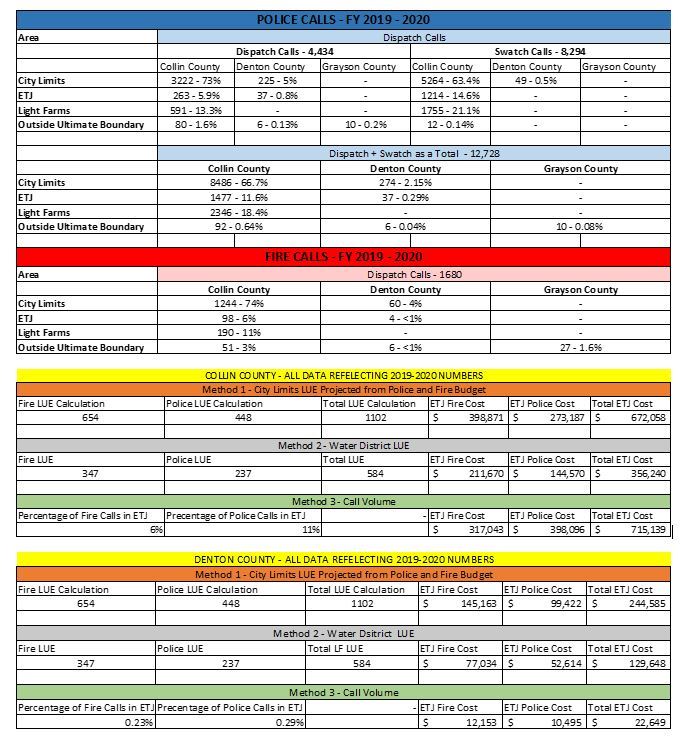